Kudos for the Renault Koleos

WHILE NO ONE WAS LOOKING, THE RENAULT KOLEOS GOT REALLY GOOD

Away from the headlines about Mercedes-Benz's record-breaking sales totals, press releases detailing Jaguar Land Rover's new-tech offensive and ... well, Holden's anti-mullet obsession, a lot has been going on at Renault.

You remember Renault, the French car company that sort of invented the people mover? It's good at hot hatches, too, but mainly known for vans in this part of the world,

I've had reason to reacquaint myself with Renault's line-up. The degree to which it has matured and extended past the Megane is impressive.

The Captur crossover is a tastily designed car that is comfortable and fun to drive. The manufacturer still makes the Clio and Clio RS, as well as the Megane hatchbackrange, including the always bonkers Megane RS 265 and 275 track day assault weapons for the true aficionado.

And then there are those delivery vans of various shapes and sizes you see everywhere; the Trafic 3 mid-sizer is - and I'm not being facetious - the best van I have driven in about five years.

But without burying the lead, while everyone was looking elsewhere, the Renault Koleos has become really good.

For a start, it's not the slightly awkward Nissan X-Trail-based mid-size SUV you might be mis-remembering. The modern Koleos is a different beast, with broad shoulders and sculptured good looks. At over 4.5m long, it feels like an XL-sized SUV. 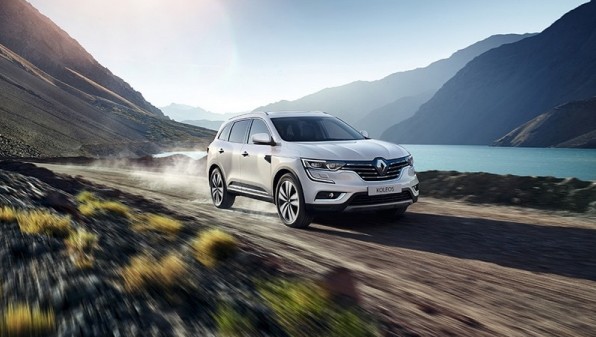 All Koleos have 18" alloys filling the wheel arches, although the manufacturer saves the nicest design for the top-spec version, as shown in the range-topping Intens trim.

In this state of dress, the Koleos features plenty of chrome on the outside, but not in an overzealous Beijing-Auto-Show sort of way.

It's tastefully trimmed with the shiny stuff, yet the addition of metallic framework around the headlights, through the side of the car and even around the exhaust pipes at the rear, provides for a visual line-break between this one and the Zen grade (available as either a front- or four-wheel drive).

Exterior aesthetics aside, the Koleos is packed with new-tech surprise-and-delight stuff these days.

The Intens' centre stack is dominated by a lovely 8.7-inch portrait-format touchscreen that looks more like a tablet device. The system navigation is simple; a tiled layout detailing control of audio, climate, vehicle data and phone or device connectivity.

Speaking of navigation, GPS is standard in this grade Koleos. A rear-view camera with parking sensors is included, as is cruise control with Active Emergency Brake Assist, which warns the driver of impending rear-bumper-shaped danger ahead in heavy traffic.

Other niceties include heated and cooled front seats, Bose premium audio and -- in the top trim Koleos -- an electronically opening boot and panoramic sunroof.

Cabin materials are all top-notch, with stitched soft leather seats providing for some ace ambience. And it's roomy; there is a huge amount of space for rear seat passengers (class-leading rear knee room by all accounts), while the boot provides for 458-litres of on-board real estate to cram full of stuff. If you need to add more practicality, the Koleos boasts a 2000kg braked towing capacity.

Power comes courtesy of a 2.5-litre, four cylinder petrol engine with 126kW of peak power available. The Intens grade is a 4x4-only affair and feels nicely planted on the road. I was surprised by the eagerness of the engine. There's plenty of oomph despite the vehicle's relative size.

About the only negative I can put my hand on - after dropping it several times with a teeth-clenching clatter - is the smooth-sided key card you use to access the Koleos.

It's a weighty, credit card-sized "key" that resembles a Mini-me iPhone. But there is no facility to attach it to a good old-fashioned key ring, so you end up with yet another thing to carry. I don't know why Renault persists with the gimmicky ignition key, but at least the previous plastic-y one had a hole in it through which you could feed a key ring.

Still, that's a relatively minor quibble. The updated Koleos is an impressive SUV. It also offers something a little different in a sea of the usual common or garden variety German, Japanese and Korean fare on our roads.

While the other two French brands seem to have abandoned the SUV, Renault has cracked it. And that deserves more attention.

Con: Skoda Kodiaq is imminent and will offer seven seats for similar prices