The name sounds like a chocolate bar and the machine itself resembles a toddler's push-along toy, but Renault's Twizy is a very real thing. And now it's here in New Zealand. 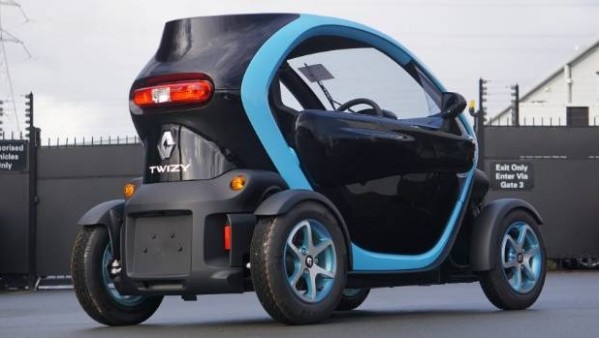 Twizy, which was launched in Europe back in 2012, is a tiny city car with two (well, one and a bit) inline seats. It's a pure-electric machine and gives the outward appearance of being pure sci-fi. It's here as part of Renault NZ's push into all things EV, joining the plug-in Zoe supermini and the Kangoo van.

All three vehicles are 100 per cent electric. None of this hybrid nonsense.

But while Zoe and Kangoo are officially on the Kiwi market, Twizy is officially just for fun. At least for now.

If you hadn't noticed, it's not really a car in the conventional sense. It's classified as a 'heavy quadricycle' in Europe. In France, quadbikes and ATVs are very much the thing for ripping around the streets of Paris, so Twizy makes a lot of sense there.

There's no such category in NZ for now, which means any potential owner would probably have to register the Twizy as a motorcycle or ATV and then apply for a helmet exemption.

Renault NZ is working on that, hopeful of a result with NZTA that allows Twizy to be driven on public roads, probably with a few restrictions (motorways spring to mind).

In the meantime, Twizy is here to draw attention to the EV cause and tear up the carpark at Renault NZ headquarters - which is as far as we got to drive it. See above.

"It's promotional, it's a bit of fun and it's 100 per cent electric," says Sal Marti, Renault NZ brand manager. "We've really bought into the whole EV thing and this helps awareness."

Twizy is an aluminium/plastic machine with a 13kW/57Nm electric motor and rear-drive. Maximum speed is 80kmh (there's also a 'light quadricycle' 45kmh version in Europe) and homologated range is 100km, although Renault quotes real-world figures of 70km in summer and 50km winter.

One of Twizy's many claims to fame is that it was party developed by Renault Sport Technologies.

But don't go expecting electric (metaphorically that is) performance: with 0-45kmh in 6.1 seconds it'll keep up with traffic, but you get the feeling it was safety-first with Twizy's powertrain and chassis. Response to both steering and throttle is gentle to say the least.

No matter: it's a hoot all the same. And you'd be surprised how fast a 'car' feels when you're sitting so low and there are no side windows.

Assuming the NZTA thing can be sorted, how much? Marti will only acknowledge that a showroom-specification Twizy would be "much cheaper than a Zoe". In the UK, it's actually around half the price of a Zoe so let's call it $35,000. Expensive for a three-quarters-scale plastic car, but Twizy doesn't necessarily have to make economic sense. It just has to make you feel good.

Ah yes, the Zoe. We've driven that already so we won't dwell on it too much, except to say that it has style, practicality and decent range on its side: Renault NZ reckons independent power-company testing in local conditions resulted in a real-world 160km on a charge (official figure 200km), and the car comes with a range of adaptors to cover Type 1, Type 2 and home plug-ins. The big handicap is the thing we just mentioned: the $75,000 price.

The Kangoo ZE Maxi van is expensive as well: $74,990 for the two-seat version and $77,990 for a five-seater with rear chairs that fold away. They both come only as long-wheelbase Maxi models.

"We're up against a high price with this vehicle," says Marti. "So we thought, why not make it as big as possible?"

But it's also a stroke of genius: there's a small but enthusiastic market among corporates that need a van this size and are keen on showcasing their green credentials. Air NZ has added Kangoo ZE to its fleet and Marti says there are another three companies on board. Announcements to follow.

It's not for everybody, of course. With a 44kW motor (the much smaller Zoe has a 65kW unit) it's no ball of fire: it'll take you 22.4 seconds to get to 100kmh on a motorway on-ramp, and that's without a load on board. Range, though impressive for an EV, is a limiting factor for a commercial vehicle: the official European figure is 170km, but in the real world it's more like 120km (or 80km in winter) according to the same testing regime that was undertaken in NZ for Zoe.​

Assuming a customer can work in that context, the Kangoo ZE is superbly executed. There's very little difference between the ZE and a conventional model in terms of the driving experience.

There are certainly none of the potentially distracting EV-related digital displays you get in plug-in passenger cars (Zoe included): the instrument panel is bespoke for the Kangoo EV and gives you need-to-know information about how real-time kW-output and electric range, but it's all delivered via very conventional dials and dot-matrix displays.

We drove the two-seat Kangoo ZE in convoy with the Zoe, but the five-seater is a particularly impressive package: an LCV that can also be an SUV substitute in the weekends. Not convinced? Understood, although the five-seat Kangoo (admittedly not the long-wheelbase one like this) is considered a perfectly acceptable people-carrier/family car in Europe.

The rear seats are fixed to the floor, but they can be folded to liberate extra load space: 3.4 cubic metres maximum, compared with 4.6 for the two-seater. With either model, the front passenger seat can also be folded down to carry items up to 2.9m long.

The Kangoo does also come in colours other than white. Indeed, the factory offers over 400 different hues designed to match customers' corporate colour schemes.